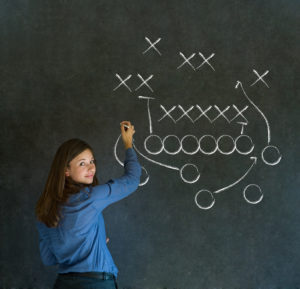 Fantasy Football season is right around the corner. Does it surprise you that over 17 MILLION women play Fantasy Football? In fact, participation has grown over 14% in just the past three years, according to Giana Pacinelli, an advertising executive, freelance writer and adjunct professor with a passion for fantasy football and the women who are at the fore of the movement.

According to Fantasy Sports Trade Association, currently, 1 in 3 fantasy sports enthusiasts are female – with 59.3 million fantasy sports players in the United States and Canada.

Here are some fantasy football stats for you:

The growth of female fantasy football participation parallels the growth of social media since 2008. The rise of blogging and the use of social media platforms like Twitter, Facebook and the popularity of group chats have created space for communities to come together to share the love of the sport, tips and insights, and of course the space to rehash the game of the week and player performance.

As a gender strategist and fantasy football enthusiast myself, I am fascinated by both the popularity of the league and the surging participation of women. At a time when gender stereotypes and unconscious bias are making headlines, the fact that women are blazing trails in the front office of the NFL, sportscasting and in various aspects of fantasy football is encouraging – any myth-busting. 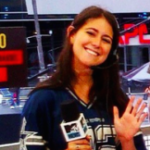 For perspective, I spoke with Giana Pacinelli about her insights on the growth of female participation in fantasy sports (football in particular) and why she thinks more women should join.

JTH: Fantasy football is an unbelievable cultural phenomenon. How did you get involved and what is the genesis of your women in fantasy sports series?

GP: I’ve been interested in fantasy football since I was in high school. I had a group of guy friends that taught me about football and I loved the competitive aspects of it. I was immediately hooked. When I was in college I wanted to talk with whoever would talk to me about fantasy football. Nobody believed I knew what I was talking about so they would quiz me about “who was the quarterback for the Steelers?” Writing has always been a passion of mine, so after college, I began writing about sports and football on a freelance basis. Last year I had the opportunity to interview ESPN’s Fantasy Guru Matthew Berry after the 2016 season and I asked him to name the top five most influential women in fantasy sports. Once we got the discussion rolling I was pleasantly surprised to find that he was having difficulty narrowing down his list to five, since women have been extremely instrumental in making the world of fantasy sports into a successful and growing enterprise. That conversation and the generous feedback I got from the community led me to create the women in fantasy sports series. As I’ve been writing about fantasy football more in depth, I’ve also been writing for twoqbs.com about two quarterback strategies for fantasy football along with other forums to share my thoughts and analysis.

JTH: What is the most surprising takeaway you discovered about women’s involvement in fantasy football?

GP: What was interesting for me as I did the women in fantasy sports series was their answers to my preliminary question about how they got their start in the industry; each woman I interviewed noted that she saw another woman doing it and then thought she could also do it. One woman saw Stephania Bell doing it, another saw Liz Loza. It was funny to hear. Each woman laid the foundation for the next one. It’s like it is many industries. You see someone you can relate to having success and that gives you the motivation to do it yourself. Each new woman into an industry adds her own unique skill set to it. Now, these women have had a hand in making fantasy football one of the top 10 fastest growing industries in the country.

Also, the internet and social media have made it easier for more people to get their voices heard and to stay connected. Many of the women I interviewed started websites, blogs, podcasts and their social media presence right when Twitter was gaining momentum, which helped them develop their brands. I use Twitter because it gives me such valuable, real-time information on fantasy sports. I’m also involved with fantasy football Twitter chat (#WeDemGirls) with women I’ve never even met before, but we all connected through the platform and through our shared love of the game. For women wanting to get started in fantasy football, I definitely recommend getting a Twitter account and following the #fantasyfootball hashtag.

JTH: Why should women join a fantasy league? What’s in it for them?

For me, the competitiveness was what drove me. Then, I started to notice all these other huge advantages for following the NFL. In the business world, it’s hard for women to participate in the networking aspects like playing golf or smoking cigars. But if you’re into sports, you are passionate about some team and have equally as much hatred for another team. I can talk with a stranger for two hours and feel completely comfortable because we both like a certain quarterback or a certain player both screwed us in our fantasy week, Being able to talk about sports gives you some street cred, and it also helps keep a conversation going with someone you’re hoping to build a relationship with.

Now I realize that my love for sports has put me at a huge advantage in business, relationships, and life. I wrote about this last year, about how fantasy football is a great conversation starter. Although the football season is only 17 weeks long, the NFL markets it in a way that there’s something to talk about or debate on all year long.

JTH: Finally, I have to ask, give me three great sleeper picks that aren’t on anyone’s radar right now.

JTH: Thanks, Giana. Best with the season

The NFL season kicks off on Thursday, September 7. You still have time to buy a guide, study online and sign-up for a league. If you want to win, I suggest you start following experts like Giana at @Gianaaaa ‏for advice on the game, introductions to the women who are leading the parade and to see how her sleeper picks do this season. I guarantee you that at least 17 million women are playing to win and to quote Brady, “rub it in pretty good when they win”.