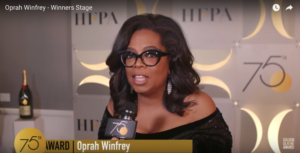 Is your company ready?

In January 2017 millions of women marched to show solidarity. Throughout the year we heard more and more growing voices in the collectiveness of the #MeToo and #TimesUp movements. And last night at the Golden Globes, Oprah Winfrey and the women of Hollywood threw down the gauntlet on Gender Equality.

What does this have to do with your company or business?

Women’s voices are rising, as a business person, if you didn’t watch the Golden Globes, you absolutely need to know what’s on the horizon. Women’s voices have reached a tipping point and they are demanding to be heard. If your company doesn’t have a strategic leadership mindset on recruiting, retaining and engaging women, you are going to lose in the workplace and in the marketplace. In the marketplace, women control 87 percent of the B to C market spending. Literally, everything sold in this country at a retail level is influenced by women.

What is your company going to do when an illegal or illicit practice comes out about your firm, and 87 percent of your consumers stop buying from you?

In the workplace, companies need to see the Tsunami on the horizon. Women, People of Color and Millennials are 85 percent of the new workforce. 2018 will be the year your company is going to be asked a series of questions.

Are you ready to have progressive conversations regarding pay inequity, sexual harassment, and gender inequities faced by women in your workplace? Do you have a written women’s retention and advancement plan, unconscious gender bias training and a course of action to create more male champions allies and advocates? If you can’t read the tea leaves that are so apparent today, you have already adopted a going out of business strategy.

It is imperative for companies to realize that the women in the marketplace and in the workplace are not just the present but also the future of your organization.

At YWomen, we work with companies that are adopting best practices, engaging men (who still make up 85 percent of senior leaders in corporate America) and articulating the strong business case for advancing women. It’s an exciting time to be doing this work, and I see an opportunity for a massive awakening in a variety of industries at every level. So many of the people I work with already “get it,” but the prominent national conversation gives them a chance to articulate their views to a wider audience and put into action new and progressive plans to promote gender equity, pay equity and leadership advancement within their organizations.

Women will be heard in 2018, and the results will be breathtaking to watch.

Jeffery Tobias Halter the country’s leading expert on engaging men to advance women. He is the President of YWomen, a strategic consulting company that helps organizations create Integrated Women’s Leadership Strategies, drive actionable business plans and strategies to attract, retain and advance women and address gender bias in the workplace. To access where your company is, download Jeffery’s 30-point Readiness Assessment. To begin conversations about gender, diversity, and finding male allies subscribe to his Gender Conversation QuickStarters newsletter. Jeffery is a two-time TEDx speaker and frequently talks at industry and corporate events.

Share on FacebookShare on TwitterShare on Linkedin Feel free to share!
Posted in ** Strategy, In The News and tagged Advancing Women, Golden Globes, Oprah, Times Up
← Flash Point: The Effect Of The #MeToo Momentum2018: A Cultural Turning Point for Women →