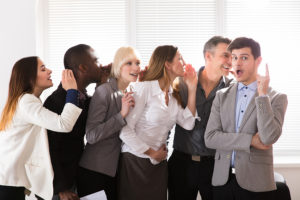 The three things best-in-class companies are doing to advance women and what that means in the fight against sexual harassment.

Earlier this year, I wrote about Women at the Tipping Point. More than 500,000 women had just marched on Washington, demanding that their voices be heard. Over the past year, I have spoken at or attended more than 30 women’s leadership events. This includes speaking to 12,000 attendees at the Massachusetts Conference for Women, 8,000 at the Texas Conference for Women, 22,000 global associates at Bristol-Myers Squibb and dozens of other events, including Women of the Vine & Spirits, Mercedes-Benz, Women in Automotive, the Cincinnati Chamber of Commerce, Nestlé Purina and more. Yes, women’s voices were rising in 2017. And then in early October, we experienced the flash point: sexual harassment and #MeToo.

Just as the Weinstein scandal broke, Gretchen Carlson released her book, “Be Fierce: Stop Harassment and Take Your Power Back,” and the #MeToo movement reemerged and exploded on social media. These latest developments have permeated all the conversations we’re having around women’s leadership advancement strategy in corporate America. What I am most moved by is that best-in-class companies are not sweeping this conversation under the rug or running in fear, but instead they are talking about these issues. They also are consistently doing three things that position them well not only to advance women but to identify and put a stop to a culture within their organizations that would tolerate the sexual harassment of women. Promoting a culture that is committed to advancing women to senior leadership positions goes hand-in-hand with reducing the instances of abuse within an organization.

What I’ve learned this year from best-in-class companies that are making a real impact can be summed up as follows:

1) They treat their women’s leadership initiative as a change initiative rather than a program or policy change.

Also, on the issue of sexual harassment: Most men are just fine. Please continue to mentor and sponsor women. Encourage them to post for open jobs. Sexual harassment is a heinous personal crime. In my 35 years in corporate America, I would say 97 men out of 100 act in a professional manner toward women. There are many, many good men out there. Sadly, there are also men who are predators, using their power and voices to create hostile work environments. It is critical for men to call out other men. However, this is not the time to disengage with women, but rather to get involved by listening, learning and being part of the solution.

As 2017 closes out, we are at a unique tipping point in terms of achieving gender equality in the workplace. The time is ripe to begin the sometimes difficult, but productive, conversations at work about advancing women, and we can use the momentum of the current national conversation to address systemic issues that may have been ignored or swept under the rug in the past.

An excellent way to begin these kinds of conversations is by taking a moment to subscribe to my newsletter, Gender Conversation QuickStarters. Every month, we bring you three hot topics accompanied by thoughtful questions to get the conversation started.

This post is cross-posted on the HuffPost. Image: Bigstock-AndreyPopov

Jeffery Tobias Halter is a corporate gender strategist. The country’s leading expert on engaging men to advance women, Jeffery is the President of YWomen, a strategic consulting company. If you would like to access where your company is, download Jeffery’s 30-point Readiness Assessment. A highly sought-after speaker and thought-leader, Jeffery is a two-time TEDx speaker and frequently talks at industry and corporate events.