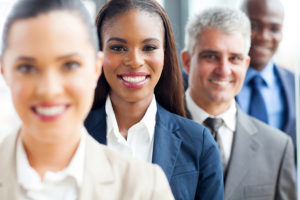 Have the Will to Drive Change.

The difference between a successful person and others is not a lack of strength, not a lack of knowledge, but rather a lack of will. – Vince Lombardi

Given the war for talent, the effects of retiring baby boomers and the costs associated to recruit and retain employees, it is in companies’ self-interest to address the business case for diversity and gender equity in the workplace. Successful leaders must have the will to address systemic inequities, biases and cultural norms that hold back or drive out women and minorities.

I have attended scores of women’s leadership events during the past few years and witnessed many amazing women (and a number of men) talking collectively about how to advance women. I have had the pleasure of working with C-Level male leaders who are true champions and advocates and are demonstrating the will to drive change in their organizations. Companies making real progress are doing four things.

These first three things organizations need to do to advance women were inspired by the Male Champions of Change, an institute formed by male CEOs in Australia who outlined what men (i.e. still 85 percent of senior leaders) need to do to drive long-term systemic change for women. The fourth comes from my executive briefings and consulting with executive teams, senior HR leadership and Chief Diversity Officers. In previous posts, I’ve distilled Listen and Learn and Lead into steps that you can put into immediate practice to drive change.

Let’s turn our attention to Having the Will.

“Have the Will” organizations

Having the Will to change is the fourth thing your company needs to do after your leaders have listened, learned and led, and it is the most important element of a company’s success in advancing women.

Willingness to change means examining your company’s results, acknowledging they are not acceptable and choosing to do something about it. Below is what the average company looks like for women and men, by level:

Your numbers may be better or worse. The question is, are your numbers acceptable to you as a leader of an organization? Many people say it’s because of unconscious bias that organizations (specifically men) aren’t intentional in their actions. I beg to differ. If you listen to Margaret Hefferman‘s TED Talk she states it’s not unconscious bias but willful blindness.

The willingness to accept these numbers and choose to accept status quo is not unconscious bias but willful blindness. – Margaret Heffernan

So which companies “Have the Will?”

Kudos to the more than 70 companies that have committed to follow the Paradigm for Parity® 5-Point Action Plan to achieve parity in leadership levels by 2030. In late 2017, 19 Paradigm for Parity companies were honored for achieving a minimum of 25% of women on their boards. Some were big names like Accenture, Coca-Cola, and Walmart, but other smaller non-Fortune 100 companies in male-dominated industries such as Newmont Mining Corporation, American Electric Power Company Inc, and Ingersoll-Rand.

As part of the 2016 United State of Women Summit, the White House issued a call to action to America’s businesses, both large and small, to pledge to be open and transparent about their pay-bands and to address unconscious bias and structural barriers by the end of the year. More than 100 companies signed onto the Equal Pay Pledge.

Part of my personal leadership vision is to move the needle on gender equality. – Dennis Nally, Chair of PwC Int’l Ltd

Openly, publicly committing to change. This is what Having the Will to change looks like. Organizations and leaders are NEVER satisfied with status quo. Leaders need to look at their data, review the findings and require their leadership team to take action.

Here’s a simple test for your company

If women are truly a business priority of your organization, how many full-time resources and millions of dollars do you have committed to this work?

Chances are your women’s strategy is owned by your women’s resource group, a committed group of volunteers with a budget well south of $50,000. If women were truly a priority, companies would be sourced, staffed and budgeted appropriately. I cannot recall the last successful brand launch or M&A that was conducted by volunteers and a few thousand dollars. Organizations must be willing to staff and fund their women’s leadership initiative like any other corporate priority.

Four things your company needs to do to advance women

To summarize this series, in Part 1, I encouraged men to genuinely talk to and Listen to their female colleagues. You will find that men and women are having significantly different experiences in the workplace. In Part 2, I encouraged leaders to Learn and write detailed business cases for change tied revenue, profit, and company reputation. In Part 3, we explored Corporate Champions of Change who are Leading by example.

Men owe it to themselves, their companies, employees, shareholders and their daughters to do a better job advocating for women.

The rest is up to you!

Jeffery Tobias Halter the country’s leading expert on engaging men to advance women. He is the President of YWomen, a strategic consulting company that helps organizations create Integrated Women’s Leadership Strategies, drive actionable business plans and strategies to attract, retain and advance women and address gender bias in the workplace. To access where your company is, download Jeffery’s30-point Readiness Assessment. Jeffery is the founder of the Father of Daughter Initiative, creator of the Gender Conversation QuickStarters newsletter and the Male Advocacy Profile. Speaker, consultant and thought leader, he has authored two books, WHY WOMEN, The Leadership Imperative to Advancing Women and Engaging Men and Selling to Men, Selling to Women.

Share on FacebookShare on TwitterShare on Linkedin Feel free to share!
Posted in Accountability and tagged Have the Will, Lead, Learn, Listen, Paradigm for Parity, United State of Women Summit, Why Women
← Gender Issues in Business – podcastFathers, Stand Up to Gender Inequality in the Workplace. →