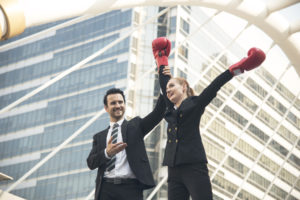 Fathers of daughters need to be outraged at the state of gender equality in this country.

For many women, one of the defining male relationships in their lives is the one with their fathers. While a father’s role has certainly evolved over recent years, one thing remains the same. We want the best for our daughters, and we have a role to play in ensuring they receive the opportunities they deserve.

Like many Boomer fathers, I encouraged my daughter to reach for the stars, explore her interests and pursue educational options that would open doors for her career and life. My wife and I provided a safe space for trial and error. We wanted her to be a strong, confident, and self-reliant woman.

Yet for most of my business career, I never made the connection that if I wasn’t advocating for women, calling out bias and holding other men accountable for their actions, I was actually hurting not just my daughter’s future, but the futures of my colleagues’ daughters too. You see, many men never make the connection that if we aren’t acting as visible and vocal advocates for all women, our daughters are going to face the same bias and hostile workplaces that we helped create.

If you don’t believe bias exists in the workplace, do this one test for a week. Just listen and observe. In most meetings, women’s voices and ideas are talked over or ignored, as Susan Shira illustrates in her article in The New York Times, The Universal Phenomenon of Men Interrupting Women. Additionally, observe if women do more office housework such as taking notes, planning social events and getting the coffee. If you want more data, all you need to do is ask. If you ask a woman in a genuine matter what these instances feel like, she will tell you.

These workplace inequalities may seem minor, but when taken together, they can cause numerous hurdles and challenges for our daughters, including earning 80 cents for every dollar earned by our sons for doing the exact same job. Gender pay inequities directly impact our daughters’ lifetime earning, spending and savings power, and for Latina and African American women, the gender pay gap is even wider. Is this what we mean when we say we want our daughters to have the opportunities they deserve? I doubt it.

What’s a father to do?

In 2015, I created the Father of Daughter Initiative as a guide to help men make the connection between women at work and their daughters and to take action to bring about change for the women in their lives. Some actions include:

I propose that this year when your daughter hands you your Father’s Day card, you give her something in return: your signed Father of Daughter pledge. In doing so, let her know that you WILL BE advocating for workplace change TODAY to help create a level playing field for her future.

Of course, you don’t have to be a father to participate. The Women Championing Women and Advocating for Women pledges provide roadmaps for anyone who is looking for actionable steps to take on a daily basis to create an equitable future.

P.S.: If you’re curious where you are on the ally/champion/advocate continuum, take the Advocacy Profile assessment I created with Rachana Bhide to learn more about being an effective champion and advocate for women in the workplace.

Jeffery Tobias Halter the country’s leading expert on engaging men to advance women. He is the President of YWomen, a strategic consulting company that helps organizations create Integrated Women’s Leadership Strategies, drive actionable business plans and strategies to attract, retain and advance women and address gender bias in the workplace. To access where your company is, download Jeffery’s30-point Readiness Assessment. Jeffery is the founder of the Father of Daughter Initiative, creator of the Gender Conversation QuickStarters newsletter and the Male Advocacy Profile. Speaker, consultant and thought leader, he has authored two books, WHY WOMEN, The Leadership Imperative to Advancing Women and Engaging Men and Selling to Men, Selling to Women.

Share on FacebookShare on TwitterShare on Linkedin Feel free to share!
Posted in Advocacy, Blog and tagged father of daughter initiative, gender inequities, gender pay gap, Men interrupting women
← Have the Will! The Four Things Your Company Needs to Do to Advance Women (Part 4 of 4).Top 20 Women In Leadership Blogs, Websites & Newsletters in 2018 →