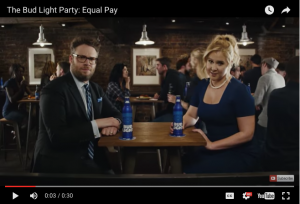 It’s not often that my job is done by an advertisement. But this week, the folks at Bud Light stepped up to the microphone to talk about gender pay equity. As many of you know, I’ve been encouraging men to step up and get involved in the conversation about advancing women in the workplace. My advice is to begin by having meaningful conversations with a female colleague about her experiences at work. I never expected to see the conversation about equal pay happen on prime time TV in the form of a beer commercial.

Earlier this week Anheuser-Busch’s Bud Light released the newest addition to its satirical Bud Light Party ad campaign. The campaign is a spoof of the political campaign season and the brand takes a stance on topical non-divisive issues to create a brand/party platform. The new spot, titled Equal Pay, features spokespersons Amy Schumer and Seth Rogan in a lively conversation about the gender gap in price and wages, which ends with Rogen leaping up to, take immediate action.

“women don’t get paid as much as men and that is wrong.”

In a nutshell, the 30-second spot highlights the facts about inequity:

Seth Rogen notes, “women don’t get paid as much as men and that is wrong.” Amy Schumer continues, “And we have to pay more for the same stuff,” like cars and dry cleaning. She then notes the selling point: “Bud Light costs the same no matter if you are a dude or a lady.”

“The Bud Light Party is about bringing people together and sparking national conversations around timely topics,” said Alex Lambrecht, vice president of Bud Light, said in a statement in AdAdge. “In our newest spot, Seth and Amy have a colorful banter surrounding the matter of equal pay, which the Bud Light Party proudly supports.”

Kudos toÂ Anheuser-Busch’s Bud Light and their ad agency Weiden+Kennedy for a timely and on-pointe spot. It’s been noted that Schumer and Rogen were paid the same amount for appearing in these ads. Additionally, A-B/Bud Light will donate $1 to Catalyst, a nonprofit organization that promotes inclusive workplaces for women, for every social media post that uses the hashtag #CheersToEqualPay from June 27 through July 1, 2016.

Is your company ready to have a conversation about pay equity? It’s time to make pay equity part of your company’s talent and brand platform.

Jeffery Tobias Halter is a corporate gender strategist. He is a leading expert on engaging men to advance women, Jeffery is the President of YWomen, a strategic consulting company. A highly sought-after speaker, Jeffery is a TEDx speaker and frequently talks at industry and corporate events.