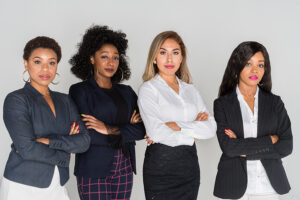 It’s Time for Advocates to Step Up

In fact, it must.

As Dr. King reminds us, “Corporate America consists of all of us. We’re their patrons. We’re their customers. They have a responsibility to humanity, not just as a corporate citizen and an entity that has the right and the free market enterprise to make money, but also a role and responsibility to invest in the people and invest in the uplifting of that and the fairness of society.”

The challenge is that most companies and employees don’t know how to start. Most companies lack truly integrated strategies to advance all women, let alone women of color* specifically. In fact, in my gender advocacy work over the past 20 years, I’m shocked by the number of white men (and white women) in leadership positions who don’t even have 10 women of color in their work or friendship groups, not to mention on their leadership teams.

I firmly believe that progressive companies are starting to make headway, slowly. The two things that are missing are a sense of urgency and more vocal and visible support for advancing women of color. This is where advocates need to step up. Because even self-proclaimed advocates are not doing enough.

McKinsey & Company and LeanIn.Org recently released their state of women in corporate America report, Women in the Workplace 2020. This annual report examines more than 350 of the largest companies on the planet and what they are doing to advance all women. Almost 50 percent of this year’s report focused on the unique challenges faced by women of color. One of the most alarming pieces of data was the fact the even self-proclaimed advocates for advancing women of color were falling short.

The research points out that 61 percent of men and 65 percent of women say they are allies for women of color at work. However, when pressed for actions they take, the results came up short.

If advocates are not visibly and vocally committing to individual actions, then how can we expect the rest of the organization to do so?

The McKinsey/LeanIn data also pointed out that:

Additionally, the “Only” experience is still common in most companies. One in five women say they are often the “Only” women in the room in most meetings and workplaces in general. This is an even greater challenge for women of color. More than 80 percent of Onlys report significantly higher instances of microaggressions and sexual harassment.

The data is overwhelming and can be no longer ignored.

It’s REALLY time for advocates to step up for women of color.

Each of us has a sphere of influence. The people in your sphere watch your actions (and inactions), value and respect your opinion, and look to you for social and professional cues.

I’m calling on my network to step up. If you’re a member of any type of employee resource group, it’s time to step up and be an active advocate

If you’re a self-proclaimed advocate for women, it’s time to step up.

If you’re a father, brother, spouse or parent who wants a better future for your daughters (and sons), it’s time to realize that if you’re not advocating for women of color, you’re hurting the chances of all women to advance, including those in your life. It’s time to step up.

Also, realize that staying silent or choosing to do nothing you are, by the nature of this work, complicit in holding back not just women of color but all women.

10 Actions to Support Women of Color

And let’s remember that stepping up is not just about believing or saying that advocating for women is a good idea. It’s about taking meaningful action to make that “good idea” a reality in your organization.

“While Women of Color are grateful to our male allies who have raised their hands to support, in order for your support to truly make a difference, you have to be actively engaged as an advocate,” said Dr. Sheila Robinson, Publisher & CEO, Diversity Woman Media.

To get you started I have created take the Advocating for Women of Color Pledge. The Pledge outlines 10 key actions built on four simple themes — Listen, Learn, Lead and Have the Will.

Click here for the 10 key actions advocates can take and a stand-alone pledge to print out to remind yourself of your possible actions.

It’s time to step up and take action.

The term “Women of Color” in this context incorporates the Catalyst definition from its February 2021 women of color research and builds on it to be both inclusive and to acknowledge the different experiences and backgrounds of people who are Black, Brown or African American, Hispanic or Latina, Asian, American Indian and Alaska Native, Native Hawaiian and Other Pacific Islander, along with Women of Color who identify as Trans and Gender Non-Binary.

Related article: Even When Companies Strive for Inclusion, Women of Color Can Feel Left Out