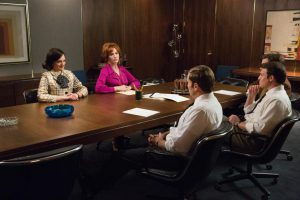 It’s going to be terrible to say good-bye to Mad Men, but let’s tip our hat to all the gruesome realities of the sixties and seventies’ workplace the show has exposed us to.

Joan and Peggy may be outstanding female employees, but their journeys have been anything but smooth.

Particularly Joan, whose bumpy ride through workplace politics has reminded us of the rampant sexism back in the day.

Of course, things are exponentially better now; you certainly won’t hear words like “Honey” or “Sweetie” being thrown about in most companies with a functioning HR department. No, the issues are made up of seemingly minor micro bias that women still receive every day in the workplace.

Consider the tasks that women are often accorded with: taking notes in the meeting, planning office parties, (still) making the coffee in some places or being excluded from water cooler talk involving sports. Even something as simple as going to lunch with the guys and not even asking female colleague speaks volumes.

This exclusion sometimes extends to the C-Suite, where the numbers are proof: According to a CNNMoney analysis, only 14.2% of the top five leadership positions at S&P 500 companies are held by women. There are only 24 females CEOs in all of those 500 companies.

Here are my top 5 reasons why women aren’t scaling the ranks:

If Don Draper can look at Peggy Olson’s grit and capabilities and pull her up through the ranks, surely there’s a lesson for all of us in there. Don’s mentoring and leadership style may be full of holes, but at least he tried to do the right thing.

As for Joan – I can only hope Sunday’s episode offers her some redemption.

Jeffery Tobias Halter is the country’s leading male expert on engaging men in women’s leadership issues. He is the author of two books, WHY WOMEN, The Leadership Imperative to Advancing Women and Engaging Men and Selling to Men, Selling to Women.

Share on FacebookShare on TwitterShare on Linkedin Feel free to share!
Posted in Advocacy and tagged Accountability, Gender Strategy, Leadership, Mad Men, women in business
← A Roundup of Upcoming Speaking EventsThe One Thing Male Leaders CAN Learn From Mad Men →