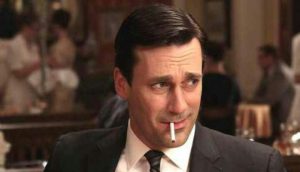 Say what you want about the portrayal of male leaders in the AMC hit series, Mad Men. Sexist? Yup. Pigs? Yup. Able to give tough feedback? YUP!

Don Draper may have been a creative genius who was a pain to work with, but he had a few redeeming moments during the show.

Like this one time in Season 4 where Peggy Olson goes to Don to ask him to fire an employee who’s giving Joan Harris a hard time. Don insists Peggy do it herself saying if he fired the man, her team would see her as a snitch and lose respect for her.

“You want some respect? Go out and get it for yourself,” he thunders in true Draper-style.

Few male leaders these days would be so bold to give such honest and direct feedback to their female employees. But early in my career, I learned how men give feedback — hard, biting, and to the point.

I remember when, as a young sales rep at The Coca-Cola Company, we had just come out of a very bad customer call. We weren’t in the car 10 seconds when my boss ripped me a new one. “You really f****d up that call,” he said, as he proceeded to scream at me in a profanity based rant for the next ten minutes.

Did I learn and grow? Absolutely. Would he have given the same feedback in the same manner to a woman? Probably not.

Giving feedback to female employees, as many male managers will tell you, is a four-letter word. In general, most managers (men and women) really aren’t good at giving feedback. It’s just uncomfortable. And when you add a layer of gender on top of it, it’s a double whammy for male managers.

Here Are My Top 4 Reasons Why Male Managers Are Afraid to Give Honest Feedback to Their Female Employees:

1.You May React Emotionally: There is nothing more frightening to a male manager than having a female employee break down (or god forbid, cry) in his office after receiving negative feedback. I acknowledge fully that this a male belief. The challenge, at the end of the day, still remains how to give you feedback that you need but won’t necessarily like.

2. ‘You Can’t Handle The Truth’: Some male managers feel the need to sugarcoat negative feedback to their female employees, which is not at all helpful to the person who is seeking constructive criticism. As some men revealed in my workshops, “I can’t tell her the truth, because I’m afraid she’ll react emotionally. So I lie or choose to do nothing.”

3. The Manager is Not Prepared: Giving feedback requires the manager to come armed with facts and specific instances where the employee has failed and what steps they need to take to correct course. If your manager is not prepared, he might evade giving you any constructive criticism at all.

4. The Manager Gives Subjective Feedback: Then there is the issue that when male managers DO give feedback, it tends to be very subjective.

Fortune.com reported on a survey conducted by Kieran Snyder who studied if there was a way to quantify how male and female employees were evaluated. She collected performance reviews from 28 tech companies, large and small, and included data from 180 male and female managers. What she found was that women were subject more often to critical feedback – almost 90% of the time compared to less than 60% of the time for men. Plus, unlike the men, the women did not receive constructive criticism and were not given suggestions such as to develop additional skills, Fortune.com reported.

So, How Can Male Managers Give Better Feedback?

The key lesson we learn from Don Draper is to be direct and honest. It may hurt your female employee’s feelings now or make you unpopular in the short-term but constructive criticism will go a long way to prepare her to face future workplace challenges.

Jeffery Tobias Halter is the country’s leading male expert on engaging men in women’s leadership issues. He is the author of two books, WHY WOMEN, The Leadership Imperative to Advancing Women and Engaging Men and Selling to Men, Selling to Women.