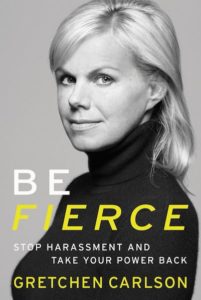 #BeFierce is a call to action for men and women.

Gretchen Carlson, one of America’s most successful and recognized news anchors, released her book, Be Fierce: Stop Harassment and Take Your Power Back, earlier this month. In addition to her personal experiences and interviews with women who have battled discrimination, her book shares the wisdom and research of lawyers, psychologists, and other experts helping to confront this problem and advance what has become an international conversation about women.

.@GretchenCarlson on her #BeFierce book chapter on the men who are doing work to publicly defend women on these issues pic.twitter.com/rG3NrHKW9f

“When my situation became public, I was surprised by how many men approached me to thank me for speaking up,” Gretchen said. “Often, they said they felt strongly about the issue because of their daughters or their wives. They wanted to be part of the solution. And I realized that we can’t fix this problem without men. It’s a societal issue, and women alone are not going to solve it.”

This is an idea I talk about often in my work with YWomen. Men make up 85 percent of the senior leadership positions in corporate America, and it will take the engagement of men to make a difference in the corporate culture. Are men willing perpetrators, merely turning a blind eye, or are they taking the opportunity to speak out when they see something? I believe that up to 30 percent of men want to help, and we need their active involvement in the conversation.

“So, I began to interview men—some of them prominent—for my book, and it was a wonderful experience because I saw how many men were unwilling to tolerate the old culture where they are considered weak if they support women’s issues,” Gretchen said. “The comedian Larry Wilmore said it perfectly when I interviewed him: ‘I never saw sexual assault and harassment as a partisan or black and white issue. It’s one hundred percent a human issue. I have a daughter, but even if I didn’t have a daughter, I’m a human being and shouldn’t be silent.’”

Join me in congratulating @GretchenCarlson for helping women (and men!) to #BeFierce in the workplace and beyond.

Jeffery Tobias Halter is a corporate gender strategist and President of YWomen, a strategic consulting company. If you would like to access where your company is, download Jeffery’s 30-Point Readiness Assessment. You can also sign-up for his monthly newsletter, Gender Conversation QuickStarters, for tips on having impactful discussions about gender, diversity and creating male champions at work.

Share on FacebookShare on TwitterShare on Linkedin Feel free to share!
Posted in Blog and tagged #BeFierce, Be Fierce, Gretchen Carlson, sexual harassment
← My White Male EpiphanyBurger King and Bullying, a Message for Male Champions. →