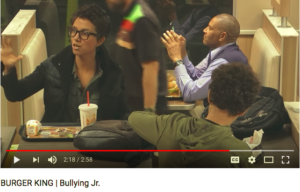 If you see something, say something.

I am often asked for simple things men can do to demonstrate advocacy for advancing women. One of the most important first steps is to just speak up when you see a problem.

Fast food chain Burger King recently created a public service announcement called “Bullying Junior” that sheds light on the issue of bullying. In the video, Burger King stages a scene with teen actors bullying a friend in the restaurant. At the same time, another actor dressed as a Burger King employee “bullies” Whopper Jr. burgers before wrapping them and serving them to customers. The experiment sought to show which situation would prompt more customers to speak out. Sadly, Burger King reported that 95 percent of the customers in the store during the experiment reported their destroyed sandwiches, but only 12 percent reported the teenager being noticeably bullied right in front of their faces.

One of the “defenders” was asked why he intervened.

“To feel defenseless – that’s one of the worst things in the world,” the customer said. “I’ve been that kid, so if I see it, I’m going to do something about it, and I hope there’s more people out there like that.”

The spot ends with kids discussing what it means to have just one friend speak up for them in a bullying situation, even if it’s simply to say, “It’s not okay.”

The same holds true in the workplace. When we see things that are blatantly unethical, most of us will not think twice about speaking up. However, when the offense is more subtle, such as a woman being talked over and interrupted during a meeting or having a sexist joke told in a professional environment, we may be more reluctant to say, “It’s not okay.”

Since half of the workforce is comprised of men, it is critical that they demonstrate not just polite behavior but also model advocacy. Promoting gender equity in the workplace can begin with the simple step of saying “It’s not okay” when we see women experiencing unconscious bias, blatant discrimination or even harassment. If you see something, say something.

Jeffery Tobias Halter is a corporate gender strategist and President of YWomen, a strategic consulting company. If you would like to access where your company is, download Jeffery’s 30-Point Readiness Assessment. You can also sign-up for his monthly newsletter, Gender Conversation QuickStarters, for tips on having impactful discussions about gender, diversity and creating male champions at work.

Share on FacebookShare on TwitterShare on Linkedin Feel free to share!
Posted in Advocacy, Blog and tagged advocacy, bullying, Burger King, sexual harassment
← Gretchen Carlson is speaking up and encouraging each of us to do the same.Corporate America’s Dirty Little Secret – Sexual Harassment →