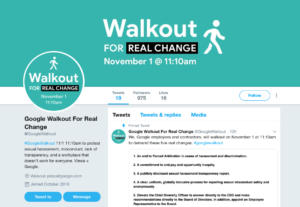 With the #GoogleWalkout, Corporate America has been put on notice.

Today (November 1, 2018), a protest by organized by Google employees unfolded at 11:10 a.m. local time at more than 40 offices around the world. The rolling walkout is keeping the much-needed conversation about “harassment, discrimination, and support for abusers” in the spotlight.

A Twitter account with the handle “Google Walkout For Real Change” and using the hashtag #googlewalkout notes:

The protest includes a call for a safe workplace, policy change requests and a commitment to “end pay and opportunity inequity.”

Organizers are expecting more than 60 percent of all Google offices and thousands of employees and contract workers to participate in the walkout. In an article published in The Cut, they outline how they are building on the work of others advocating for structural changes at Google and explain their demands.

PBS News Hour interview with host Judy Woodruff and Katie Benner, New York Times reporter, who co-wrote a recent story disclosing how Google paid millions of dollars to departing executives accused of misconduct, and the reasons for the walkout.

Today’s walkout amplifies the conversation about the vastly different experiences men and women are having in the workplace, workplace policies that protect or mask inequities and proposes real changes that companies can (and should) implement. The headlines once again show the magnitude of the problem that most companies face.

Your employees can lead/demand change or as a senior business leader you can get out in front and lead change for your organization. Which path are you going to take?

In the words of the Google motto “don’t be evil” and “do the right thing.”

Today, Google made progress toward addressing these demands. The company followed Uber and Microsoft by eliminating forced arbitration in cases of sexual harassment. It also committed to more transparency in sexual harassment reporting, and will allow workers to bring representatives to meetings with HR. We commend this progress, and the rapid action which brought it about.

Jeffery Tobias Halter is the President of YWomen, a strategic consulting company focused on engaging men in women’s leadership advancement. Founder of the Father of Daughter Initiative, creator of the Gender Conversation QuickStartersNewsletter and the Male Advocacy Profile, Jeffery is former Director of Diversity Strategy for The Coca-Cola Company and is the author of two books, WHY WOMEN, The Leadership Imperative to Advancing Women and Engaging Men and Selling to Men, Selling to Women.

Share on FacebookShare on TwitterShare on Linkedin Feel free to share!
Posted in ** Strategy, Blog and tagged #GoogleWalkouot, #metoo, Google Walkout for Real Change, TimesUp
← Advancing Women Is Not A Journey. It’s a Business Imperative And Needs a Strategy.Engaging Men in Women’s Leadership and Advancement →