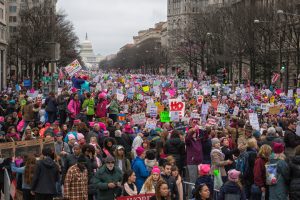 Women in droves are asking for two things, one is workplace equity and the second is pay equity.

On Saturday, January 21st, over 650 women’s marches were held in major cities around the globe. In Washington D.C. alone over 500,000 women gathered but in other major metro cities, the number of participants was also overwhelming.

While many of the Women’s March messages resonated with social issues and civil and equal rights for all groups, there are tenants that are significantly noteworthy for corporate America.

Women in droves are asking for two things, one is workplace equity and the second is pay equity, and in doing so corporate America is being put on notice.

How the major players of the Fortune 500 choose to answer these calls will dictate in large part their success in the coming years.

Many companies are already demonstrating workplace and pay equity. You need to look no further than AT&T, MasterCard, Colgate-US, eBay, InterContinental Hotels Group, and 100 other companies who have signed the White House Equal Pay Pledge in 2016. Additional best practices can be found in the Fortune’s Best Places to Work for Women. Additionally, CEO’s from over 30 companies have committed to the 5-Step Action Plan from Paradigm for Parity to accelerate the pace of achieving gender parity – companies include McKinsey & Company, The Coca-Cola Company, Bank of America and Nordstrom.

At the core of equity are transparency and accountability. Both of these elements speak to the heart of every corporate practice in place in companies.

While these programs speak to the HR practices, this conversation must be held at the highest level of the organization as ultimately it is up to leadership at the highest corporate level to stand-up. In the coming months, the level of dialogue regarding women is going to escalate quickly.

In addition to the White House Pledge, there are a number of state governments also working to advance women and they are doing so in unique and bipartisan ways. Currently, Massachusetts, Utah, and Iowa have all joint government and corporate partnership pledges to advance women.

Economic benefits are at stake here, as well. According to the 2016 McKinsey Global Institute (MGI) report, gender parity in the workplace could add as much as $2.1 trillion to the United States GPD in less than two decades. Closing the gender pay gap and increasing women’s share of professional jobs and leadership positions will help to propel that growth.

This is the time for corporations to take a high road and position themselves for success. Or they can, at their own peril ignore the millions of women who just spoke by taking to the streets and who control 85% of the spending in this country.

Today, women’s voices are rising. If you’re a Fortune 500 company that doesn’t have women on its Board of Directors, what are you going to do when your customers decide to take more radical action, like not buying your products until you have demonstrated parity in all aspects of your business from the boardroom to the workplace?

The Women’s March on Washington could be the tipping or flash point that escalates the conversation and brings it from your conference room or coffee nook to the public forum. The question is will your organization embrace this opportunity or become a bystander and risk the wrath of not just 2 million women but 200 million women who shop and buy your company’s products every day.

Jeffery Tobias Halter is a corporate gender strategist. The country’s leading expert on engaging men to advance women, Jeffery is the President of YWomen, a strategic consulting company and author of the book “WHY WOMEN, The Leadership Imperative to Advancing Women and Engaging Men.”