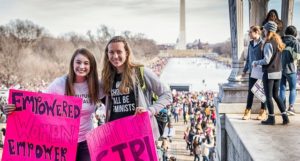 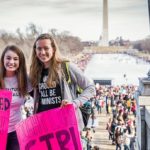 One year ago, millions of women marched to show their solidarity at the 2017 Women’s March on Washington and around the world. At that time, I wrote:

While many of the Women’s March messages resonated with social issues and civil and equal rights for all groups, there are tenets that are significantly noteworthy for corporate America. Women, in droves, are asking for two things. One is workplace equity and the second is pay equity, and in doing so, corporate America is being put on notice. How the major players of the Fortune 500 choose to answer these calls will dictate in large part their success in the coming years.

In reflecting on 2017, I believe the Women’s March and the ensuing movement provided women with a combination of impetus, amplification and sisterhood to share stories about their challenges in the workplace and beyond. More importantly, the stage to say, “Enough. Now is the time for change.”

As the year unfolded, women’s voices and issues were often in the news as women came forward with details of hostile work environments, inequities in the workplace, the gender pay gap and sexual harassment. Some examples include:

Allegations of sexual harassment and inappropriate behaviour by Hollywood mogul Harvey Weinstein happened to surface the same week that Gretchen Carlson released her book Be Fierce, outlining her call to action to address harassment and other misconduct in the workplace. Throughout the year, we heard more voices raised in the collectiveness of the #MeToo. In the wake, movie moguls and stars have lost their jobs, CEOs have been ousted, media personalities have been removed from their anchor jobs, elected officials have resigned and, in some cases, charges have been filed.

As 2017 closed, Time named “The Silence Breakers” the Person of the Year in a decision that captured the momentum and movement of the year; noting:

On New Year’s Day 2018, some of Hollywood’s most powerful women launched the Time’s Up initiative to address sexual harassment and inequality, aimed at helping fight abuse, not just in the entertainment industry, but in every workplace in America. The initiative is designed to include and advocate for women who are working in lower-profile jobs and expected to tolerate inequality and offensive behaviour as the price of having a job.

Let’s be candid, women have been speaking up for years but haven’t been believed, and there were almost never any consequences for the offenders, while women’s careers were either derailed for reporting incidents or the women were silenced by the forced arbitration clauses in many employment contracts.

What is your company doing to address workplace and pay equities?

Women’s voices are rising. If your company doesn’t have a strategic leadership mindset on recruiting, retaining and engaging women, you are going to lose in the workplace and in the marketplace. In the marketplace, women control 87 percent of the B to C market spending. Literally, everything sold in this country at a retail level is influenced by women.

The Women’s March has been a catalyst for progressive and difficult conversations about the state of women in society. In the workplace, existing rules must be enforced and new rules developed to guide appropriate and inappropriate behavior in the and around the workplace. Gender equity for women can happen with:

In 2017, we witnessed the advent of growing awareness and increased conversation and understanding of the challenges women face in society and in the workplace. And this weekend we witnessed women taking to the streets again in large numbers.

For the second year in a row, women marched to give voice to the need for change. In 2018 it is imperative that corporate America and state and national government legislators seize upon the growing national conversation and put into action new and progressive plans to promote gender equity and pay equity.

Women will be heard in 2018, and the results will be breathtaking to watch.

Jeffery Tobias Halter the country’s leading expert on engaging men to advance women. He is the President of YWomen, a strategic consulting company that helps organizations create Integrated Women’s Leadership Strategies, drive actionable business plans and strategies to attract, retain and advance women and address gender bias in the workplace. To access where your company is, download Jeffery’s30-point Readiness Assessment. To begin conversations about gender, diversity and cultivating male allies, subscribe to his Gender Conversation QuickStarters newsletter. Jeffery is a two-time TEDx speaker and frequently speaks at industry and corporate events.

Share on FacebookShare on TwitterShare on Linkedin Feel free to share!
Posted in Blog and tagged women's march, women's march on washington
← Learn – One of the Four Things Your Company Needs to do to Advance Women (Part 2 of 4)Is Your Women’s Leadership Strategy Sitting on a One-Legged Stool? →