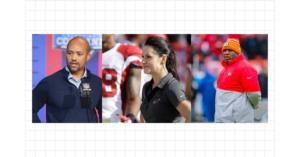 The NFL recently announced a number of diversity initiatives to create more opportunities for women and people of color (WPOC). Did they put a TD on the board or is this a blocked kick?

From my perspective as a corporate gender strategist, they got two things right. First, they are finally creating a panel of external experts to help them. (This is so long overdue I hesitate to give them kudos for it, but it’s a start). AT&T, Coca-Cola and dozens of Fortune 500 companies started using external help 20 years ago, and the NFL is finally deciding it cannot solve this issue on its own. Let’s give them a two-point conversion for this.

Second, they are mandating the hiring of a Sr. Offensive Coaching position who is a woman or a person of color. In today’s game, being an offensive assistant gives you a leg-up on becoming a head coach. This will immediately create 20 new opportunities, as only 12 clubs currently have a person of color in a senior offensive role. (Also there are no women currently in this role). Let’s give them a TD for this.

On the defensive side of the ball, People of Color hold 17 positions as Sr. Defensive coordinators. This is just over 50 percent in a league where 99 percent of defensive players are men of color. Not including some language regarding other Sr. Coaching roles is a big miss. Let’s call this a Sack, loss of 10 yards.

What did they get wrong?

Lack of Accountability. The glaring error is that there are no teeth in the policy. There is no provision describing what happens if teams don’t comply. It allows teams to give lip service to the rule as they have with the Rooney Rule, which requires one in three candidates to be a minority for any Head Coach role. A failure to adhere to this was not addressed by the league but by a coach, involving Todd Boyles and the Miami Dolphins. Currently, a lawsuit is taking place for failure to comply. If they are serious, they should lose a high draft pick for failure to comply. This is certainly a fumble for loss.

Finally, there is nothing mentioned about improving front office representation. Training and developing more diverse General Managers and other key roles are just as important as the other roles. These are the men (yes, they are all white men except for 10), along with the owner, who make the hiring decisions for the organization. If the NFL was serious, they would hire a deep bench of minority leaders and appoint them Assistant GMs. This would create an immediate pool of diverse candidates who are assisting with hiring. This is like the Falcons blowing a 25-point lead in the Super Bowl!

The upside for women

Curious about how the changes might impact women, I reached out to Joanne Pasternack, avid sports fan and President, CEO of Oliver+Rose and Co-Founder of Athletes’ Voices, and the Chief Strategy Officer for the Women’s National Football Conference, the premiere tackle football league for women.

“The lack of representation has never been about lack of talent,” Joanne said. “It’s about lack of access and lack of opportunity. It’s not a lack of experience but lack of exposure. I spent nine seasons working in the front office of an NFL team with some of the most talented coaches in the history of the game. And as the Chief Strategy Officer for the Women’s National Football Conference, I can say without hesitation that the NFL is not reaching its full potential without the inclusion of incredible coaches (who happen to be women) like Odessa Jenkins, Dr. Jen Welter, Stephanie Balochko, Keke Blackmon and Beth Buglione.”

When I asked Joanne what she hoped for in terms of outcomes, she was clear about what bringing in more diverse, talented coaches would mean to the league in general.

“If you aren’t seen, you can’t be heard,” she said. “This initiative kicks a door open and forces teams to look outside of their preexisting talent pool to those outside their current vantage point. I hope this is a step in the right direction, bringing more talented coaches to the table, creating a stronger league and better on-field play, thus building the evidence that coaching acumen is found not only in the current coaching profiles but also among underrepresented groups – women, people of color and individuals with different backgrounds, experience, physical limitations and sexual orientation. When we bring in the best, we are the best. Period.”

Joanne is 100 percent spot-on. Until the NFL, and specifically, the owners, internalize instead of mandate policy changes, it will never truly unlock the potential of the value of diversity, equity and inclusion. Though this has taken far too long, I believe it is a big step forward. If they can add accountability and a similar stance at the GM and front office level, I believe at some point in the future this will be a huge overtime victory.