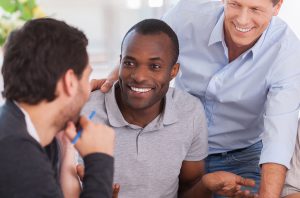 Is the ‘Man Code’ Holding Female Employees Back?

I’ll tell it to you straight: there is a man code that guides men’s actions –in and out of the office. There are certain behaviors that we are taught when we step foot on the playground as children. They are self-reinforced by members of the power group and if you want to fit in you better play by the rules. With all due respect to Nike, “runs like a girl’ is still not a term of endearment to any boy on the playground. Forty years later these playgrounds rules become male cultural norms in organizations. By default they are still the operating norms for most men in companies today.

I know this first hand because for the first 20 years of my career I was often a reinforcer of these norms. I spent 20 years in Field Operations and you better be tough because your mettle was tested everyday. I worked with very strong women who also assimilated to fit in. It’s just what you did. But times have changed, (or have they?)

I now coach organizations on how to engage men in women’s leadership advancement. Possibly the greatest barrier we talk about is that to many men, if we are advocating for women, we are violating the tenets of the man code.

Here are examples of four male behaviors that you’ll recognize from day-to-day office life or life in the field. These male norms, considered a badge of honor in sales, operations, and supply chain are just a few of the factors that often unintentionally hold women out of the C-Suite.

Man Code 1: Avoid All Things Feminine: Even engaging in a dialogue about women’s advancement is seen as acting feminine. In business, particularly in sales, middle and high school labels are replaced with demeaning phrases such as ‘grow a pair’ or ‘man up’, or ‘put a skirt on’ words that can push men to act more aggressively than what they are feeling. (In fact I am certain I have lost my card to the man club just by writing this article).

Man Code 2. Be A Winner: This principle is all about the attainment of status and position of power. Any activity that increases one’s wealth, social prestige, and power over others is viewed as manly. This norm of winning above all is seen as a revered model of male behavior and contributes to and reinforces common gender gaps in leadership all over the world.

Man Code 3. Show No Kinks in the Armor: In a business setting, showing emotional toughness is often regarded as a key leadership attribute in men. It’s more socially acceptable for men to act detached, confident, certain, and focused whereas, unfortunately, the same standards don’t apply to the women. While men are seen as assertive and competent, women showing the same behavior are labeled cold, aggressive or a witch. Moreover, a corporate culture of supporting and even encouraging aggressive male behavior reinforces stereotypical views of women’s leadership attributes.

Man Code 4. Be a Man’s Man: By default, I have to seek and enjoy only the company of other men. The stereotypically male activities of grabbing a drink after work, only talking about sports, or even something simple as having lunch with the same guys every day all fall within the parameters of being a man’s man. And while there is nothing wrong with these activities we need to be mindful that they are very exclusionary of women.

I know what the men are thinking now, “Hey, this is just guys being guys and we aren’t going out of our way to scheme against any women in the workplace.” You may also argue there is a certain value to displaying such behaviors. As male leaders, you must be aware that everything communicates. If you are looking for ideas that you can implement in your daily routine to be more supportive and advocate for women, please check out my Fathers of Daughter Initiative

Finally ladies, you need to know that the man code exists. I will tell you that despite the man code, male champions do exist. The challenge is to engage them in both head and heart discussions and match the criteria required to become a male champion with the mindsets and motivations they already possess.

Does your office have a Man Code? Has it held you back? Drop me a line in the comments below. 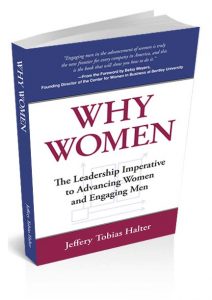 He is the President of YWomen, a strategic consulting company focused on engaging men in women’s leadership issues. Jeffery is a TEDx speaker, Huffington Post Blogger and the author of two books, WHY WOMEN, The Leadership Imperative to Advancing Women and Engaging Men and Selling to Men, Selling to Women. Follow him on Twitter at @YWomen.