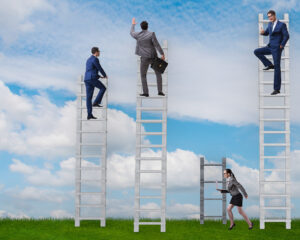 Women in the Workplace: One step forward. Two steps back. Part 2.

The 2022 LeanIn.org and McKinsey & Company “Women in the Workplace” report is another somber and sobering look at the state of women in corporate America. While the current report focuses on “how the pandemic has changed what women want from their companies, including the growing importance of opportunity, flexibility, employee well-being, and diversity, equity, and inclusion,” the bottom line is that women haven’t advanced much since this study began in 2015.

This visual from the recent LeanIn/McKinsey study illustrates the challenges, roadblocks and bias that exist in organizations. This is a snapshot of the composite of 333 of the largest multinationals in the world.

Simply put, women are roughly 50 percent of all entry-level positions. Then, as they move up, their numbers start to shrink within the organization.

The leaky pipeline begins with a woman’s very first job.

For every 100 men promoted from entry-level to manager, only 87 women are promoted, and only 82 women of color are promoted. As a result, men significantly outnumber women at the manager level, and women can never catch up, creating the pipeline crisis.

Companies have had eight years to address the broken rung that was identified in the first LeanIn/McKinsey study in 2015. As Amanda Hammett and I noted in our 2020 white paper Women + The Broken Rung, companies must focus on the pathway to first-level manager. We also highlighted at that time, by 2025, 75 percent of the U.S. workforce will be Millennials and Gen Z employees. They are intent on advancing in their careers now. Addressing the issue of diversity for all is something that must be done now or companies will continue to have an insufficient pipeline of women and diverse leaders who are prepared to move into leadership roles.

The Greatest Choke-Point Challenge. While there are pressure points at every level, the most challenging loss for women is the critical move from Sr. Manager/Director to VP. The recent LeanIn/McKinsey Women in the Workplace study found that more women leaders are leaving their companies at the highest rate in years. The numbers are staggering; for every one woman at the director level who gets promoted to the next level, two director-level women are left behind and ultimately choose to leave.

They don’t leave because one woman got a promotion. They leave because for every one woman promoted, two men are promoted. This forces them – your best and brightest – to leave for greener pastures.

In summarizing solutions noted in the LeanIn/McKinsey 2020 study, there are five steps companies can take to fix their broken rung – and ultimately their pipeline:

We can’t allow another decade to pass without addressing the leaky, crumbling pipeline of women in our organizations.

Related article: Women in the Workplace 2022: One Step Forward. Two Steps Back. Part One.