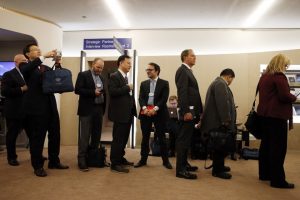 Even though research has shown that there are concrete benefits to hiring and promoting more women (gender diversity) into leadership positions, progress remains stilted in corporate America, especially at the top. Only 14 percent of executives at Fortune 500 companies are women. While the number of female board members has been increasing, the number of female executives remains stagnant despite efforts and stated corporate commitments to change the ratio.

Jeffery Tobias Halter thinks that men should help spearhead efforts to change that. Tobias is the former director of diversity strategy at Coca-Cola, but since 2001, he’s been working as a consultant focused on getting men to participate in gender-balancing initiatives. His company, YWomen, has worked with dozens of Fortune 500 companies, including McDonald’s, Walmart, GE, Citigroup, and Costo.

Click here to continue reading my interview with Bourree Lam for The Atlantic.

Share on FacebookShare on TwitterShare on Linkedin Feel free to share!
Posted in In The News and tagged Gender Strategy, male champions, The Atlantic
← Five lesson companies should learn from Uber about sexual harassmentWomen Can Achieve Their Career Goals by Educating Men →