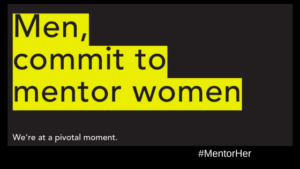 Yesterday, those rumblings were confirmed in an update from Sheryl Sandberg and the Lean-in organization. We’ve heard talk in the wake of sexual harassment allegations and the #MeToo movement that men are uncomfortable mentoring, working alone or socializing with a woman, as it may be seen as inappropriate to be meeting one-on-one with a woman.

LeanIn.Org and SurveyMonkey partnered to understand what men and women are feeling in the wake of the widespread media reports of sexual harassment.Their research finds that almost 30 percent of male managers say they are uncomfortable working alone with a woman — more than twice as many as their prior study. The number of male managers who are uncomfortable mentoring women has more than tripled from 5 percent to 16 percent. This means that 1 in 6 male managers may now hesitate to mentor a woman. The discomfort around meeting with female colleagues outside of work is even more pronounced: Senior men were 3.5 times more likely to hesitate about having a work dinner with a junior female colleague than a male one.

Distressed by the findings and the negative impact these attitudes could have on advancing women in the workplace, Sandberg put out a call to action, inviting men to commit to mentoring women. The campaign is called #MentorHer, and more than 38 business leaders and CEOs have stepped forward to participate, including Cisco’s Chuck Robbins, Disney’s Bob Iger, Facebook CEO Mark Zuckerberg, NBA’s Adam Silver, and Netflix’s Reed Hastings, among others.

Sandberg states the issue clearly, “People with mentors are more likely to get promotions – yet women are less likely than men to be mentored, and women of color get the least support of all.”

I wholeheartedly support the #MentorHer campaign and encourage everyone to get on board.

Visible, vocal leadership is a critical element of winning cultures and companies. We need more prominent business leaders to take a stand and state a zero-tolerance policy on sexual harassment and misconduct in the workplace. Additionally, senior leaders need to articulate their vision for parity and equity for all employees at work and hold their management teams accountable for measurable results.

Let me also be blunt. In my opinion, the men who are stating they are afraid to mentor women weren’t doing anything to advocate for them in the first place. And I believe many of them have treated women badly in the past and are just afraid of raising the issue.

Here are the facts:

2) Dump the Pence Rule. Take two women to dinner. Start a mentor circle and mentor several women at the time. Bring two women on a business trip or several members of your workgroup.

3) Cut the crap. We cannot have men stop talking about/mentoring/supporting women’s leadership advancement. Women are more than 50 percent of the workforce and make up the future leaders of your company. It’s bad for business and just plain stupid.

My sense is that many of the male managers who noted discomfort working alone with a woman are the same men who don’t understand what this “women’s leadership advancement thing” is to begin with. And now this “concern” provides them the perfect excuse to opt-out. It’s time to cut the crap!

Every month, I meet and train hundreds of men who are acting as allies and champions who are choosing to advocate, mentor and sponsor women and are already doing this work in a respectful manner. The last thing on our minds is that there will be some sense of inappropriateness seen in the process. We understand that our involvement is long overdue.

The majority of men — good men — will continue to do this important work because it’s the right thing to do; because there’s an overwhelming business case to advance women and because we are not the least bit concerned that any impropriety will take place. For the men doing this important work? Keep up the good work and encourage other men to join you.

Jeffery Tobias Halter the country’s leading expert on engaging men to advance women and frequently speaks at industry and corporate events. He is the President of YWomen, a strategic consulting company that helps organizations create Integrated Women’s Leadership Strategies, drive actionable business plans and strategies to attract, retain and advance women and address gender bias in the workplace. To begin conversations about gender, diversity and cultivating male allies, subscribe to his Gender Conversation QuickStarters newsletter.

Share on FacebookShare on TwitterShare on Linkedin Feel free to share!
Posted in Blog
← Is Your Women’s Leadership Strategy Sitting on a One-Legged Stool?What kind of workplace will our daughters inherit? →